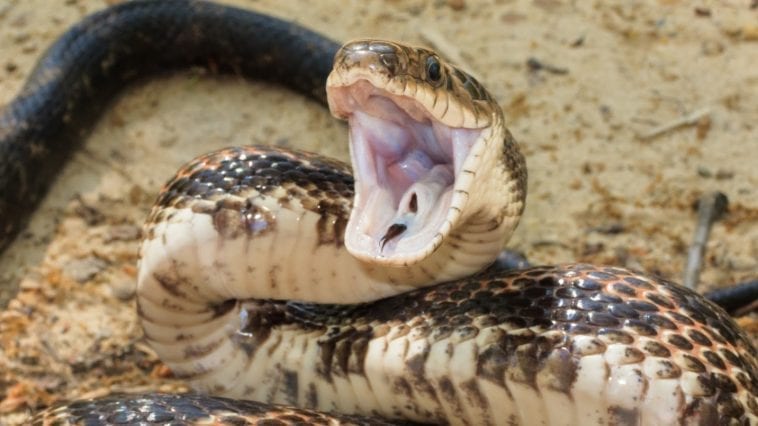 Do you remember Little Red Riding Hood gaping about how big her “grandma’s teeth” are? These teeth are big and long, but what can we learn about them? The long and pointed teeth found in animals are called fangs. In mammals, fangs are also called canines. Fangs can be found in other animals like dogs, spiders, cats, and tigers. In this article, we will focus on the fangs that snakes have. If you want to learn more, keep on reading.

Fangs can be defined as specialized teeth that are equipped to deliver an animal’s venom to threats and prey. For snakes, there are three kinds of fangs, and each of them can be classified into three groups of venomous snakes. These snake groups are Colubrids, Elapids, and Vipers and their fangs can either be Opisthoglyphous, Solenoglyphous, and Proteroglyphous Fangs. Each of these groups can be differentiated by their special designs and the way that venom is being injected into their prey.

These venomous snakes are known to have the ability to control their powerful venom. This means that if they want to, they can bite without inflicting their venom. Usually, these snakes deliver dry venom-less bite if they are just striking out their defense, but they include venom in their bites when their predatory drive to kill awakens. Therefore, this action suggests that the snakes use their venom for their feeding instincts and not for self-defense.

But, if you consider smaller and younger snakes, the way they dispense their venom can be a little different. They are less precise in the way they use their venom because they can still be familiarizing themselves and learning about how these mechanisms work. This way snake venom works are very complex and it works through mixing with saliva, which is secreted by special glands in the snake’s mouth. This powerful venom flows through the snake’s fangs and it gives the victim some immobility and allows the snake to consume prey as needed.

Solenogyphous fangs are considered as the most advanced and most evolved fangs. They can be seen with vipers. Based on some studies on fossils, these fangs have changed very little since they have evolved dated around 40 million years ago. This is why these fangs can be found in all of the Viper species in the modern world. Some species of the solenogyphous fangs include:

These fangs can be described as long and tubular and their size can help in holding their prey in place, which will then deliver deep wounds. When the viper strikes their prey, the hollow core of their fangs allows the venom to flow from their glands through a slit in the opening where their tooth is. These fangs also shed like the snake’s skin every couple of months.

The solenogyphous fangs fit inside a pocket of bone in the jaw, which allows them to fold up into their mouths when they are not in use. They also use this feature is also used when they are feeding, and they also give the fangs the power to walk prey down their throats as a whole. These fangs are also the most dangerous, most accurate, and most specialized anatomical feature that gave the vipers the opportunity to get the most advanced venom delivery system on the entire planet.

There are also known modified solenogyphous fangs, and they can be spotted on the snake family of Lamprophiidae, subfamily Atractaspidinae, and this includes the species known as African dwarf garter snakes, harlequin snakes, stiletto snakes, mole vipers, and burrowing asps. In some snake species, their fangs are movable, but it does not have the unique foldable ability of the original solenogyphous fangs. Even so, the morphology of the fangs in these snakes is still linked to Viperids because of their common ancestry of which this type of fangs was first seen decades ago.

Now, the second form of fangs in snakes can be found in the Elapid family. This snake family includes cobras, sea snakes, and other snakes. Some popular Elapid species are:

For them, these fangs are usually fixed, and this fact makes these teeth a lot shorter if compared to the average Solenoglyphous Fang.

But, as the previous type explained, the Proteroglyphous fangs still delivers venom the same way, from a gland in the head and through a slit that appears as an opening in the tooth. In some snakes, for instance, the spitting cobra, you will be able to see developed modifications that speed up the velocity at which the venom is injected.

Unlike vipers, more than one fang can sit inside the tooth pockets, which helps the Elapids strike and hold on to their prey in order to deliver the maximum amount of venom possible. This is comparable to the quick strikes that Vipers do. For Elapids, of which there are many ones that act dangerously, they have partially movable Proteroglyphous fangs.

On the other hand, some Elapids grow out and evolve from wearing Proteroglyphous fangs. For example, the fish egg-eating sea snakes that are also Elapids eventually lost their venoms. This thing proves that having fangs and being venomous both are evolutionary developments that are just there to help the snakes feed instead of just providing them a strong defense.

Colubrids are a group of snakes that consists of many different kinds and many different types of snake species. The classification of this group is constantly debated by many herpetologists and other experts. Nearly three-quarters of all snakes in existence belong to this group of snakes. Many of them hunt in trees, but most of them live underground. There are some individuals that can be seen burrowing under the soil and swimming in ponds and swamps. Most of them live in the tropics, but they can also be found staying in areas with colder climates.

Some popular Colubrid species are:

For now, Colubrids are defined as snakes that have Opisthoglyphous fangs, which are commonly described as rear fangs. Rear fangs are located towards the back of the snake’s mouth and this act requires the snake to chew on their prey literally and for the venom to be delivered. Although some people may think of this as something that is least effective as a form of fangs, some of the world’s deadliest snakes have these rear fangs to help them in dealing with their target prey.

If you look at evolution, Opisthoglyphous fangs have evolved quite a few times, and there is still a lot of research that is needed to help understand how much the capacity of these fangs in dealing with venom is. For some Colubrids to have these fangs, their venoms are deadly for their prey. Most snake venoms are compared to mild venoms as strong as bee stings, which will not serve as a fatal act for humans. Even so, because of the lack of research, caution must always be exercised to make sure that rear-fanged species are handled well.

What You Should Know About Venom Evolution

The need for venom has evolved to help these snakes survive well and adapt to the changes all over the world. Throughout the eras, reptiles have been adapting and evolving to meet and sustain specialized habitats and dietary requirements. This will help them design fangs. The advanced saliva mixtures which lead to various painful venoms have placed these deadly snakes into ideal categories of their own. If researchers, experts, and snake owners try to gain a greater understanding and preservation of these beautiful creatures, you will feel safe in dealing with snakes, and you will learn more about caring for them.