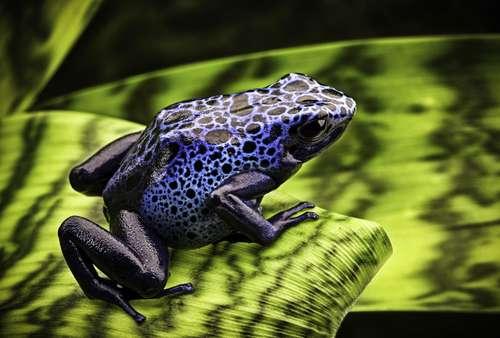 Frogs are of any various types of amphibians that belong to the order Anura. In general, the frogs do not have a tail, protruding eyes, strong, webbed hind feet that were basically adapted from them to leap and swim. A frog also possesses a smooth and moist skin. Frogs’ skin is usually sensitive, and if you have this pet, keep it away from salt in order for them to survive.

In this post, you’ll learn more about frogs and why you should keep them away from salt.

Frogs are any member of the diverse and largely carnivorous group of the short-bodied tailless amphibians. Frogs have a long powerful back leg in which that the frog jumps from place to place and that as said, the frogs do not have tails. Frogs are usually greenish-brown in color. Frogs do make a low noise, which is called a croak.

Several frog species are highly tolerant of highly arid conditions, and they can resist salt environments. For instance, the green toad of Central Europe or Bufotes viridis can tolerate extremely high temperatures until 40°C and can withstand up to 50 percent of body water loss.

Most frogs cannot tolerate living in a long period in saltwater environments. The blood salinity of frogs is not densely packed in saltwater. That’s why if a frog is put in saltwater, it could lead to dehydration. Also, it could poison the frog, most especially the young ones. Unlike other amphibians with tolerance to saltwater, frogs can die after a couple of hours when placed in saltwater.

Here are the other good-to-know facts about frogs’ behavior:

Frogs generally live in rainforests just like those that are located in Africa and in South America are where frog habitats that have the most and largest amount of different kinds of frog species in the world. Streams, ponds, lakes, creeks, and rivers are also great habitats for the frogs. Some frogs live in freshwater’s sources of the California mountains are the mountain frogs.

Many studies have found that frogs in saltwater habitats are those habitats that were flooded by seawater. Some examples include mangrove swamps, which are flooded every day by tidal fluctuations, resulting in a saltwater build up in standing water. One of the most well-known frogs to inhabit in this type of environment is the crab-eating frog.

Other kinds of frogs can even live and survive in hot deserts, just like the Australian green frogs and also in icy climates such as the Alaskan wood frogs. The frogs must have water, food, shelter, and of course, a place where it can reproduce in order for them to survive. They used to live near water areas because this is where they drink water, where they can drink water, where they can keep their skin moist and for them to lay their eggs to, of course, reproduce.

Frogs also live in habitats wherein there are lots of insects to eat. The frogs find shelters under the lily pads and plants or even inside the trees and logs. The frogs have cool, unique features that help them to survive in their habitats. Even frogs that used to live in hot deserts have special adaptations that would help them survive with every little water. The frogs are usually in water to relax their body and for them to have comfort.

Keeping Your Frog Away from Salt

Salt can kill your frog. That’s why you need to put your frog away from salt if you do not want them to die. Frogs skin is often sensitive, and if you have a pet like a frog, remember to keep them away from salt in order for them to survive. Frogs die when they are dehydrated.

Reasons Why Salt Is Harmful to Frogs

Frogs lay eggs in water, and their eggs hatch into tadpoles that grow into frogs. Not all frogs follow these exact steps, but there are few rules of thumb about the frog’s reproduction. Egg fertilization in frogs happens outside the female frog’s body instead of on her inside.

So what happens when there is salt? The most vulnerable stage in a frog’s life is the embryo stage, in which high mortality is usually experienced when a frog is in a salt environment. It is because saltwater disrupts the balanced water and ionic exchange in permeable membranes.

The frogs can stay in amplexus even for hours or even in days as the female frog releases as few as one or even as many several hundred eggs. Many species of frogs are sexually dimorphic, which means that there are differences between the bodies and the colors of the males and the female frogs.

Some of the species the males and the females are very hard to tell apart. Some of the species the male frogs the researchers can use a release call to tell which frogs are male and which frogs are female. The eggs of the frog require moisture in order to develop, and most of the frogs abandon their eggs once the eggs are fertilized. It is best to keep your frogs away from saltwater when they’re still young.

Facts About Frogs and Salt

Many frogs and other amphibian species are threatened with different anthropogenic factors, such as habitat loss, pollution, and fragmentation. Freshwater habitats salinization is one factor that causes the decline of amphibian species.