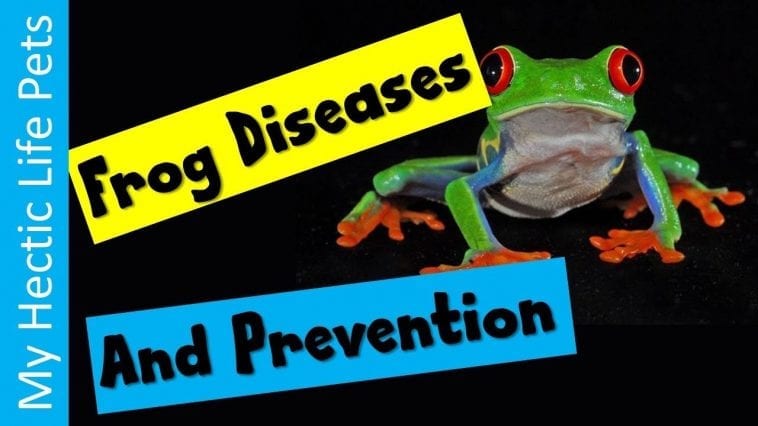 Frogs and amphibians are some of the most delightful pets to have for a lot of owners that prefer exotic animals rather than the usual domestic pets such as cats and dogs. There are plenty of different types of frogs and amphibians that can be taken care of as pets because of how most amphibians are more mild-natured and less aggressive than reptiles are. As such, you can find yourself a successful frog or amphibian owner so long as you provide the proper care and nourishment those animals need on a daily basis.

However, when you are talking about the proper care a frog or an amphibian needs to survive well, you can never discount how important it is to give the animal the proper attention it requires as far as its health is concerned. It is highly advisable that you should know about the different diseases and ailments that affect frogs and amphibians so that you will become an expert at making sure they are kept away from such illnesses that can potentially shorten their lives and affect their overall wellbeing.

Here are some of the more common ailments that frogs and amphibians suffer from:

Ranaviruses are types of viruses that affect insects, fish, and, of course, amphibians. This virus usually affects amphibians at their larval stage but can also be commonly found in frogs and amphibians that have just completed their metamorphosis into adulthood. Some symptoms of this virus include bumps on the frog’s skin as well as the reddening of the skin along with the frog’s limbs and stomach. The most affected amphibians tend to be green frogs, salamanders, bullfrogs, and wood frogs.

While this fungus initially affected fish and has caused the deaths of many different fishes, they are also found to have an effect on tadpoles, which would eventually carry on the ailment as they grow and develop into adults. They also affect amphibians that have just finished metamorphosis but are rarely found in adults. But, recently, this fungus has been found to have an effect on newts.

The Chytrid fungus is actually quite common in amphibians. This fungus affects the amphibian’s skin, which can eventually cause different types of infections on the frog or any other type of amphibian.

Water molds usually affect salamanders and other types of amphibians. However, this type of ailment is usually found to affect the amphibian’s eggs rather than the larvae or the adult amphibian.

Amphibians are water-dwelling animals that spend time on land and in water. That means that they are highly dependent on the quality of their water for their survival and are affected by the lack of quality thereof. Any sort of alterations in the water can adversely affect the way the frog or the amphibian lives and can result in different types of diseases or even the death of the animal.

There are different conditions caused by the water quality of your amphibian. In that case, if your pet suffers from any sort of condition, it is imperative that you always take a sample of its water and have the vet inspect it to detect whether or not the ailment is related to its water. Such conditions are usually related to the chlorine levels and ammonia toxicity in the water.

All animals rely heavily on water to survive. Since amphibians are semi-aquatic, these animals rely more on the water than most other types of animals in the world. As such, it is important that you keep your frog or amphibian well-hydrated to prevent any sort of ailment arising from dehydration. However, this does not only relate to how much water your animal drinks as this is also connected to the humidity levels in its enclosure.

Amphibians require an enclosure that has high humidity levels because they rely so much on the water for their survival. Low levels of humidity or lack of moisture in the air can quickly cause skin dehydration and can lead to ailments and complications such as kidney damage. You can tell if your amphibian is dehydrated when its eyes are sunken and change in color.

Believe it or not, frogs and amphibians have really sensitive skin that can easily get affected when they are touched. Toads might be the only exception to that rule, but most amphibians have skin that is so delicate that even a slight touch from a hand can cause damage because of how a human’s skin does not interact well with the skin of an amphibian. This is why there are plenty of amphibian experts that wear latex gloves before handling their frogs and amphibians.

Amphibian hypothermia is similar to the hypothermia humans experience when the conditions in the water are far too cold. While this ailment is not too serious for amphibians and will not result in some sort of complications when treated properly, you should still be careful by making sure that the amphibian’s water is not too cold for it. Warming the amphibian after experiencing hypothermia is a quick remedy to this situation. However, expect for vomiting to happen if they had just eaten a meal but was quickly exposed to cold conditions. If not caught right away, this can lead to death. You can tell if an amphibian has hypothermia if it looks lethargic, uncoordinated, and is someone too hyperactive (a means to warm its body).

Metabolic bone disease is one of the more common diseases that amphibians and reptiles face. This happens when they are not exposed well to UV light, not given any vitamin D3 supplementation, and if their calcium intake is lower than the phosphorus levels in their bodies. As such, their bones will eventually suffer from a lack of calcium and will begin to become brittle and weak. In some cases, metabolic bone disease can lead to deformities. Most likely, the animal will have bones that may not be able to support its body and will put the amphibian at risk of injuries and even death.

A lot of amphibians have appetites that are so voracious that they will basically eat anything they see so long as it fits in their mouths. Most frogs and toads tend to be extremely active eaters that will not stop eating even though they are already full. As such, they are prone to obesity and will suffer health deterioration due to overeating and being overweight. There are not a lot of studies related to this, but most experts presume that the effects are similar to other animals that suffer from obesity.

In relation to fungal, bacterial, and environmental ailments, the best possible remedy is to provide the frog with a habitat that is always kept clean and provides it with the right conditions it needs to survive. That means that you should always make sure to regularly clean and sanitize the enclosure whenever possible to prevent the proliferation of bacteria and viruses.

Of course, you should also do your research to know what kind of environment your amphibian needs to survive well and healthily. Most amphibians require a living space that is part water and part land. The water part should have low ammonia and chlorine levels to prevent any sort of condition arising from the water quality. The entire enclosure should also be warm enough for the amphibian but not too warm. It should be somewhere between 60 to 75 degrees Fahrenheit to prevent any sort of illness that is caused by cool temperatures. Of course, humidity is important in making sure that the amphibian does not suffer from dehydration. Make sure that you keep humidity levels at around 60 to 80 percent because amphibians prefer environments that are quite humid.

In terms of the amphibian’s nutrition, see to it that you always supplement its diet with vitamins and minerals that will allow it to stay healthy. While amphibians can already thrive well on an insect-based diet, provide them with calcium and vitamin D3 supplements to allow them to develop strong and healthy bones. This is the best way for you to make sure that they do not suffer from metabolic bone diseases. In some cases, you can also provide them with a UVB light in their enclosure. As to the frequency of their meals, most amphibians have appetites that are so voracious that they will never stop eating so long as you give them food. In that case, it is better for you to time the amphibian’s meals and to keep an eye on portion sizes. Most amphibians will already survive by eating two to three times a week while eating smaller meals.