The Horned Lizard is one odd reptile in the sense that it has a defense mechanism that is quite unlike any other. Whenever it feels threatened and is on the defensive, it will squirt blood out of its eyes and seems something that is straight out of the pages of a horror movie script. It is needless to say that this is one shy and defensive reptile that is quick to try to defend itself whenever it feels threatened.

In the wild, they tend to be good at camouflaging with their surroundings and are experts at hiding due to how they know they can easily get predated on by larger predators. When they are not hiding, they spend their time looking for ants to eat but are quick to retreat to their hiding spots whenever night falls, and dangerous predators are already on the loose.

Reasons why they are not on the market anymore

It is illegal to own them

Humans are primarily the reason why they are now on the decline. Ever since the Fire Ant was introduced as an invasive species in the deserts of Texas, they have pushed away from the native ant species, which are the primary and maybe even the only source of food for the Horny Toad. But since Fire Ants are a pest to humans, they have used pesticides to kill off ant colonies regardless of whatever species of ants live there. As such, the main source of food for the Horned Lizard has declined, which is what led to the decline of these lizards’ population in the wild.

They are not good pets

The problem here is that it is very difficult to get your hands on ants as a source of food for pet lizards. As such, former owners of Horny Toads go the extra mile just to get ants for their reptiles. Others go with the conventional types of insects, such as crickets. However, they were quick to realize that Horned Lizards are too difficult to keep. Either it is too difficult to get live ants or the reptile just does not want to eat any other type of insects when you feed them crickets or other similar feeder insects. You will slowly notice it starving to death even though you try your hardest to trick them into eating feeder insects.

There is no point in keeping them 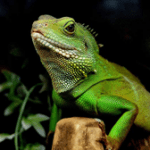