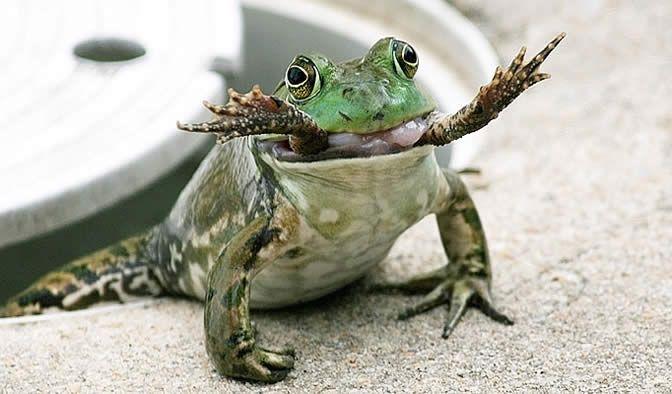 Frogs are animals that belong to the group amphibians. It means two lives. They start their lives as eggs in the water, then grow to a tadpole, then turn into a fully developed frog. On earth, there are over 5000 frog species. They are cold-blooded animals. Their body temperature is the same as the air and water temperature. They lay up under the sun to warm up when it is cold, and when it gets too hot, they get into the water.

There were frog fossils found which date back to more than 140 million years ago that dates back to the Jurassic period. Frogs are widely distributed in the whole world, but Antarctica. They live in marshes, lakes, ponds, or near or in the fresh body of water. They cannot live in saltwater or the sea.

In terms of appearance, they are repulsive and slimy. Some species look fascinating and adorable, but that’s not true for all. Some frog species are not the common and likable frogs you think. Some possess distinct appearance and characteristics, making them freaky or unusual. Here are some facts and lists of freaky looking frogs.

They swallow with their eyelid’s help

The expression, his eyes are bigger than his stomach is applicable to some frogs. Their eyes become handy tools. They use their big eyeballs to swallow. When they catch prey in their mouths, they force it down, going down their throat by pulling their eyeballs down.

They have no eggs to hatch

A herpetologist named Jim McGuire found Indonesian fanged frogs that give birth to live tadpoles without the eggs. No eggs were found but tadpoles. Normally, frogs lay eggs; then, these eggs are hatched to tadpoles; however, this was not the case of the Indonesian frog.

They give birth out of their mouths

The gastric-brooding female frog lays eggs then the male frog fertilizes them by laying sperms on top of the eggs. Then, the female swallows the fertilized eggs. The eggs go down to the digestive system of the frog, where they are developed into froglets. Later, the female frog gives birth through her mouth.

They have an unusual hatching habit

For catching prey, the Surinam toad makes itself flat, looking like a pancake. Its whole life is spent in the water. when both sexes mate, the female’s release eggs, and the males catch the fertilized eggs. The eggs are then embedded in a spongy tissue on the females back where they grow. The froglets burst out of the mothers’ back after.

Some are super-sized frogs

Frogs can grow so big, and the biggest one that grows as long as 38 inches is the goliath frog found in Western Africa. It weighs up to 32 kilograms.

They were used for a pregnancy test

Scientists found out that African clawed frogs can be used to know if a woman is pregnant. Hormones in the urine from a pregnant woman injected into the frog can make the female frog lays eggs.

Some have a visible heart

Some genus of frog possesses a transparent belly. It is called the glass frog. In 2017, a glass frog openly beat its heart in the world.

Thousands of frogs are smuggled

Edible frog’s legs are food to the French people. Some other Europeans eat the limbs too. Frogs are then imported from Turkey. Certain people can collect. The hunters must possess a license before they can collect frogs.

Some frogs have no lungs

Two frog species don’t have lungs. When the frog was cut liver, stomach and spleen occupied the space for the lungs, and mysterious cartilage was seen. The species absorb oxygen through its skin.

Some frogs have eyes inside their mouths

This frog had eyes, but they were attached to the roof of its mouth. Genetic changes are seen as the cause.

The name is taken from how it looks. It is like a turtle without a shell. It has a plump and flat-shaped body, a flat nose, beady eyes, and stumpy short legs. On their legs, there are weird claws too, making them look freakier. This frog is found in Australia. Apart from its unique look, this frog uses its hind legs to dig forward and not backward.

This is a funky looking type of frog. It is known for being one of the largest frogs in the water. It possesses too much skin amount. It has a flappy and sagging skin. This aids this frog’s respiration. Its skin absorbs oxygen from the water. It should not resurface when breathing air. This is found in the Lake Titicaca found in the borders of Bolivia and Peru.

As their name implies, these frogs have transparent skin found on their abdomen. It has a see-through skin letting you see the organs inside. These frogs are found in Central and South America. The males protect the female’s eggs found on the leaf’s underside. Guarding continues until the eggs are hatched. Although these frogs got the best camouflage advantage, their eggs are wasps target as food, but these defend their eggs with their strong kicks.

This is a tiny strange frog. It just looks like a fallen leaf having colors like gray or green and brown. Their underside is dark brown always. In addition to the fascinating color they possess, it has a snout too, which is pointed and elongated, making them stand out from others. Moreover, it has reproduction habits which are weird. Like the glass frogs, the female ingests the eggs and stored in the vocal sac of the male. Then the tadpoles stay in the same place. When they are developed, they hop out from their father’s mouth.

This frog is indeed freaky for some reason like its bumpy dermis, magical coloration, and large eyes. It comes from Vietnam. It lives in the rocky and limestone areas surrounded by dense vegetation and water. this frog must be thankful for its color and bumpy skin because it serves as a very good camouflage to fool their enemies. It rolls over and plays dead.

From its name itself, this frog is massive.  Yes, American and African bullfrogs are big, but goliath frog beats the two having a measurement of 12.6 inches from its snout to vent and weighs 7 pounds upon full maturation. Like bullfrogs, they leave near the streams and rivers and live for 15 years in the wild. They eat crabs, lizards, small snakes, and insects.

Yes, they are mutated due to pollution as believed. They have transparent skin. Some are mutated on their shoulders and even some toes. All have eyes in the pitch black.

It is also called the horror frog. It has a hairy look, which it uses as defense from predators. This frog breaks its tiny bone to come up with claws or small barbs. Its hair comes from its thighs and torso. It is 100% hair; in fact, they are dermal papillae having arteries to help the frogs absorb oxygen from the water. This dermal papilla is like external gills. Only breeding males have this.

This is known as the gliding frog. It lives in Malaysia and Borneo. It grows 4 inches in white, yellow, and bright green. They have peculiar webbed feet with membranous loose skin in between their toes. This is the reason why it can glide. It can glide 50 feet.

As mentioned before, this frog looks perfectly as a leaf. It has no tongue, teeth but with tiny eyes and appendages in a star shape on the front toes. In addition, the eggs are laid on the female’s back.

It has an oversized mouth plus stumpy legs. Above its eyes are the horn-like extensions. It looks scary and humorous. It has a coloration of a dead leaf too. It grows 7.9 inches and weighs about a pound. It is a carnivore.

In the world, there is a countless number of frogs. Most might not have been seen by many people. Some species look amazing for their colors and appearance, but it can be the other way around too. There are those who don’t look cute or as good as the others due to their unique or peculiar appearance, especially. They could look really horrible or scary that keepers would not want to raise them at home. Whatever appearance they have, there are reasons behind it. Most of these reasons are for camouflage and defense mechanism against any threat or predators. In short, any animal regardless of how it looks, should be protected and kept based on their needs.